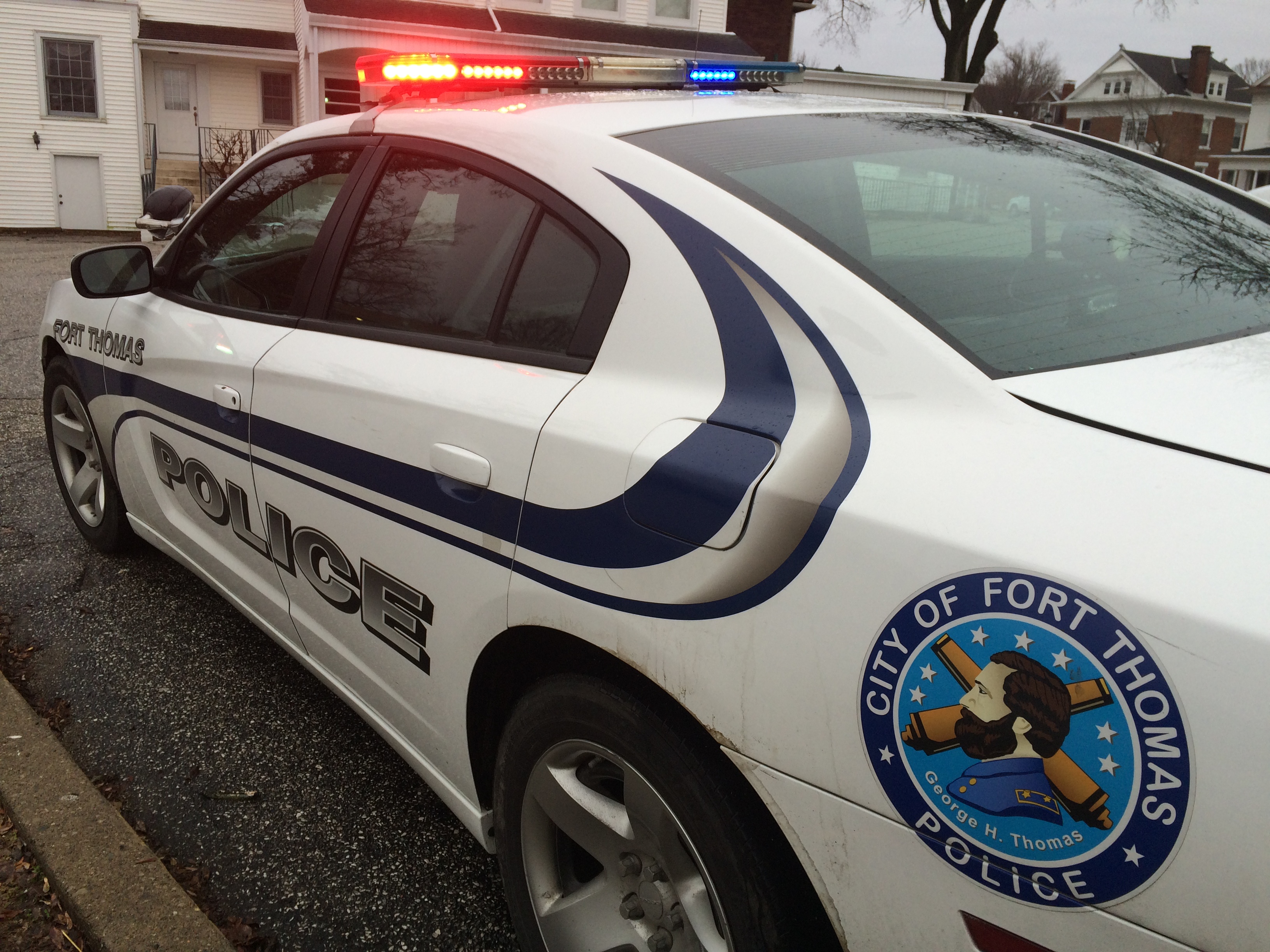 The Story of Constable William Tressler

During July 1928, Dewey Colvin and Jack Crawford (also known as “Jack Denny”) stole a vehicle in Danville, Illinois and drove it to Newport, Kentucky where they met up with Herman Steel; who had been living and working in Newport for five years. The three of them set about to rob “spooners” along county highways.

On the evening of Sunday, September 16, 1928 the three men robbed Charles Flynn, of 311 W. 6th Street, Newport, and his companion, known to him as Mrs. Adams, also of W. 6th Street, in his parked auto on Licking Pike. They robbed Mr. Flynn of $8.50, and forced Mrs. Adams into their car. The bandits disabled Flynn’s car and took off with Mrs. Adams, dropping her off in Newport.

Apparently, they went back to the area looking for more victims, because when Constable Tressler and Ft. Thomas Patrolman Harrison Herms responded to investigate the robbery, upon entering Pooles Creek Road from Licking Pike, the officers noticed a parked auto containing three men. The two officers drove just past the vehicle and Constable Tressler got out. Immediately, Crawford let loose with two shotgun blasts from the parked car, striking Constable Tressler in the back and knocking him to the ground. The three bandits turned their attention to Tressler’s car with an automatic shotgun and handguns, keeping Patrolman Herms on the floor ducking for cover. When the shooting ceased, Patrolman Herms came out of the car with his revolver drawn, but the suspect vehicle was already racing toward Newport on Licking Pike.

Patrolman Herms took Constable Tressler to his home where a physician was summoned and treated him.

Investigators found Mrs. Adams in Newport. She advised them that the trio and released her unharmed and unmolested.

By Tuesday, September 18, 1928, Constable Tressler was in Speers Memorial Hospital in Dayton, Kentucky and in very serious condition. He died Thursday, September 20, 1928, at 9:30 a.m.

Constable Tressler was survived by his wife, Hattie Tressler (44); son, Orville Tressler (21); and siblings, Robert Tressler and Mrs. Edna Fithen. Funeral services were held at Constable Tressler’s home on September 24, 1928 at 2 p.m. From there he was taken to and buried in Evergreen Cemetery in Southgate. On May 8, 1930, he was disinterred and reinterred in Highland Cemetery, Kenton County.

Four days after Patrolman Tressler was shot and six hours before he died, at 3 a.m. on the 20th, Newport Lieutenant Charles Tschudi and other officers came across Colvin near 3rd and Johnson Streets. It was later determined he was trying to break into the Kroger Grocery there. They called to him and he ran. Lieutenant Tschudi dispatched Motorcycle Patrolmen Leroy Hall and Harry Haines to pursue him. He ran down down an alley between 3rd, 4th, Russell, and Johnson Streets in Covington and Patrolman Haines fired three warning shots into the air. Colvin stopped, held his one hand up and yelled, “I quit.” But, as he turned, the other hand held a semiautomatic pistol and he fired several shots at the officers striking Patrolman Hall in the left leg. Patrolmen Hall and Haines returned fire without taking effect and Colvin escaped.

The three left town later that day. Patrolman Hall was in the hospital for more than a month, but recovered.

Ten days following that shooting, on September 30, 1928, another shootout occurred between Louisville Patrolman James W. Hardin and two of the gang after a pursuit that ended in Falls City. Patrolman Hardin was shot down in the street. The auto they were using, the one stolen in Danville, was found abandoned in an alley and was the same one used in the Tressler murder. The two bandits were suspected in robberies that occurred in Louisville and New Albany, Indiana. Three automatic shotguns and two revolvers were found in the abandoned auto. Hardin lingered between life and death for more than three weeks, but he eventually recovered.

Four days later, during the early morning of October 2, the three men bandits tried to hijack a car in Greenfield, Indiana. The car belonged to Shelburn, Indiana Town Marshal (former Sullivan County Sheriff) Newman Guy. Marshal Guy had pulled to the side of the road to sleep. The three surrounded him and, while pointing handguns at him, forced him to get out. Then, they told him to get in the back seat with Steele. Colvin took the wheel and Crawford got into the other side of the front seat. As they drove away, Marshal Guy reached beneath a blanket on the seat, pulled out a revolver, shot Colvin through the chest, killing him, and then shot Steele through the abdomen and legs. Steele and Denny jumped from the car and escaped through the brush with Marshal Guy firing after them. Steele’s body was found the next day with another, self-inflicted, gunshot wound to his chest. A nationwide search ensued for Jack Crawford.

On October 7, 1928, in Danville again, another car was stolen. Crawford and Louis Gray, also of Danville, were driving in the outskirts of Gary, Indiana on Friday night, October 19, 1928, when they were pulled over by Gary Patrolman Leo Witkowski and his partner. As they approached the car, Crawford and Gray ran. Witkowski fired warning shots in the air and the two turned and fired on the officers striking Witkowski. Witkowski, now aiming his fire, struck Crawford in the right chest and he went down. Gray escaped amid a hail of bullets.

When Crawford was well enough to travel, he was extradited to Campbell County to answer for Constable Tressler’s murder and other crimes.
On Wednesday, November 28, 1928, police foiled a plot by Crawford and his common-law wife, Miss Mary Jackson (also known as Rogers) whereby she had obtained dozens of hacksaw blades and was going to smuggle them into him. She was arrested and in her subsequent confession identified Crawford as the triggerman that killed Constable Tressler.

Jack Denny was arraigned in Campbell County Court on January 2, 1929. Lawrence J. Diskin, the Commonwealth Attorney, filed for the death penalty. Denny was represented by James Millikin and J. Garvey Davis. Crawford pleaded guilty on January 8, 1929 and was sentenced to life in prison and was spirited away under the watch of five guards amid rumors that his confederates were planning to kidnap him.

During March 1929, Crawford was placed on suicide watch at the Frankfurt Reformatory. They were considering moving him to the Lakeland Asylum for the criminally insane. We have no further record of him.

NOTE: Crawford used several aliases including Jack Denny. His actual name may have been Dale Mills.

This article was used with the permission of the Greater Cincinnati Police Historical Society. Visit their website here:  http://police-museum.org/

Contact Us Like Us on Facebook Next Events Frequently Asked Questions Welcome Package
The City staff will be providing services at the Armory (950 S. Ft. Thomas Ave.) while the city building is being remodeled. You are encouraged to make contact with City staff via email, fax or phone or use of a drop box location.  A staff directory is available on the Contacts page.  The main office line is (859) 441-1055.
We will update postings on the website and city Facebook page.
All emergency operations are in full operation at this time. Rumpke is still maintaining regular waste collection schedules.